Sublime is one of favorite bands from the ‘90s. They had a ska punk/reggae sound fused with rock and rap. Sublime was Bradley Nowell on vocals and guitar, Bud Gaugh on drums, and Eric Wilson on bass. Brad’s Dalmatian, Lou Dog, was an honorary member and the mascot. They only released a couple of albums before breaking up. It’s hard to stay together as a band when your lead singer and most talented member dies (just ask Nirvana about that). Bradley Nowell was the frontman for Sublime, but he had a little bit of a heroin problem. He started doing drugs as an experiment to see if it would help him with his music. It helped him write some classic songs that are still popular today, like “Smoke Two Joints”, “Date Rape”, “What I Got”, “Santeria”, “Doin’ Time”, “Wrong Way”, and “Bad Fish”. A lot of Brad’s lyrics are about drugs, booze, partying, and Lou Dog. Brad Nowell died on May 25, 1996. Lou Dog died on September 17, 2001. And that’s the real day the music died. There have been a couple of lineups associated with Sublime, but it’s not Sublime without Brad or Lou Dog. 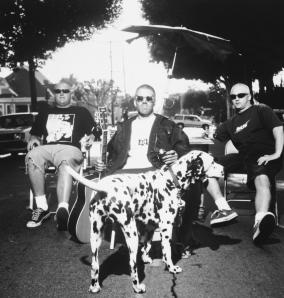