I like craft beers. My friends like craft beers. And we enjoy talking about the cool craft beers that we’ve found and tasted. One of my friend (let’s call him Joey) likes craft beers and discussing craft beers so much that he decided to start a craft beer club. The basic idea behind it was that a few of us would meet up once a month to share and drink some microbrews. We would sip a couple of beers to compare, talk about, and rate. It’s a way to get drunk and not feel like an alcoholic. We had our first meeting the other night. We all bought and brought some 22-ounce bottles and most of them were IPAs. We learned that we need to communicate some more, but it was a pretty awesome first meeting for the group. We came up with a pretty satisfactory name… we call ourselves the San Andreas Malt Club, and our slogan is that you can “Hop On It.” I like the name. It’s a pun about California and beer, and our slogan is another pun about beer. It seems to work for a beer club with people from California. It was a pretty awesome first meeting. I recommend that you start your own beer club. Just remember that the San Andreas Malt Club is already taken. 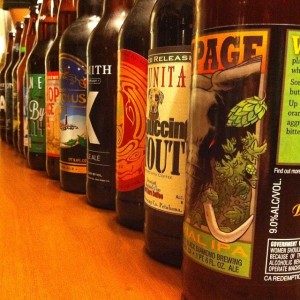