Jimmy Corrigan, The Smartest Kid on Earth is a graphic novel by Chris Ware about a middle aged loser named Jimmy Corrigan. It’s a very different comic from what you’re used to. The story jumps back and forth between Jimmy’s reality and his fantasies, and it flashes back and forth between the present and his childhood. There’s also a parallel story about Jimmy’s grandfather growing up a hundred years earlier. 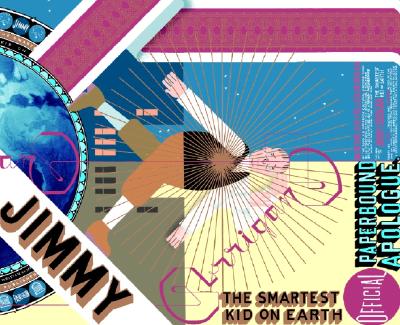 Jimmy Corrigan is an awkward loner with a rich fantasy life. He has no friends and feels obligated to talk to his mom on the phone everyday. The main storyline is about Jimmy going to meet his estranged father for the first time, and how the two strangers try to bond despite having nothing in common and nothing to talk about. Jimmy also has a habit of slipping into a fantasy, so he’ll be talking to his father in one panel and killing him in the next before resuming the conversation as if nothing happened.

In the parallel storyline, the focus is on Jimmy’s grandfather growing up with his abusive father. Jimmy’s grandfather is also shy with an overactive imagination, and there are many subtle similarities between grandfather and grandson. They look alike, they act similar, and they both share the same name. At first this parallel story seems unnecessary but everything comes together at the end. It’s a very satisfying ending that ties up a lot of loose strings, but Jimmy doesn’t really change or grow or learn anything. It’s realistic like that. He’s a broken person at the beginning and he’s still broken at the end. He’s not happy being a loser, but that’s all he knows how to be. It’s a great book. It’s a little confusing and off-putting at first, but you can’t put it down once you get into it.