John Landis directs Eddie Murphy in Coming to America. This is Eddie Murphy’s best movie, hands down. Eddie Murphy plays an African prince who comes to America in search of a bride. He brings his faithful manservant along, and hilarity ensues. Contrary to popular belief, Eddie Murphy does not play every single role in the movie. Eddie Murphy and Arsenio Hall each play four characters though. That’s a lot of comedy. 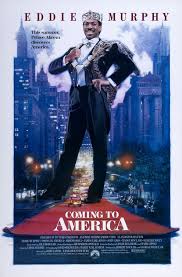 Murphy plays Prince Akeem. Arsenio Hall plays Semmi, his servant and friend. They come to Queens and land jobs at a McDonald’s clone called McDowell’s. Akeem falls for his boss’s daughter, but she already has a boyfriend. He keeps his regal status a secret, and eventually Lisa begins to notice him.

She gets rid of her boyfriend, and Akeem and Lisa start a relationship. Akeem’s parents show up, she finds out that he’s a prince, and she gets mad that he lied about being a goat herder and breaks up with him. Um, ok, why not? He goes back to Africa, and has to take part in an arranged marriage. When he lifts up his mystery bride’s veil, he sees that it is Lisa! Oh, what a happy ending.

This is a good movie with a good cast. Eddie Murphy and Arsenio Hall are at the top of their game, each playing multiple characters, and each one is funny. Eddie Murphy carries the movie, but it wouldn’t have been half as good without Arsenio Hall. They play off each other well; they should have made more movies together. James Earl Jones plays Akeem’s father, the King of Zamunda. Samuel L. Jackson, Louie Anderson and Cuba Gooding, Jr. have cameos. Shari Headley plays Lisa. She’s stunningly beautiful and I wonder why her career didn’t take off.

Eddie Murphy gets credit for coming up with the story, and David Sheffield and Barry W. Blaustein wrote the screenplay. Or did they? A guy named Art Buchwald wrote a script treatment for an Eddie Murphy vehicle in 1982. It went into development hell for a few years, and eventually was shelved. And then they made it in 1988 and Buchwald sued them. They settled out of court for an undisclosed sum. Pretty shady, but I think the studio is more to blame than Eddie Murphy.

This is a cult classic. It gave the world Sexual Chocolate and Soul Glow. It gave Eddie Murphy the idea he could do anything. It gave you a reason to forgive Eddie Murphy for shit like Pluto Nash and Norbit, and that’s saying something.