Rocky is Sylvester Stallone’s best movie. It’s a requirement for a boy to watch this in order to become a man. It is a cinematic bar mitzvah. If you’ve never seen this flick, I’m going to go out on a limb and assume that you don’t have TBS, TNT or basic cable.  I’m pretty sure there’s a cable network that shows the Rocky saga nonstop.

Rocky is the story of a boxing underdog. Rocky is just an average boxer. He’s not a has-been, he’s a never-was (and yes, I did steal that from the Mighty Ducks). He gets a shot to take on the reigning champ, and his only goal is to go the distance with him. He doesn’t want to win, he just wants to put up a fight. He doesn’t win in the end, one of only a handful of movies where the good guy loses in the end. A League of Their Own and Friday Night Lights also come to mind. It is more realistic to have a team lose rather than win everything. Most sports competitions only have one winner, and so statistically there are a lot more losers. 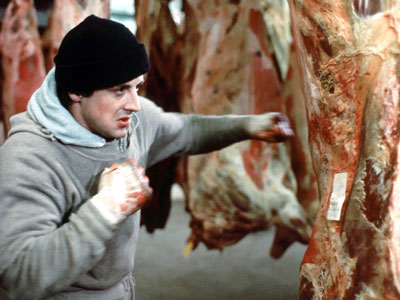 Rocky was made on a shoestring budget. The plot parallels Sylvester Stallone’s real life. It is a very personal project, and it shows. It’s a great “You-Can-Do-It-If-You-Put-Your-Mind-To-It” story. Sly wrote it as a vehicle for himself, and eventually got his way. With a budget of less than a million dollars, the film went on to gross over $225 million, earned ten Oscar nominations, and spawned five sequels. Not too shabby for a script written in three and a half days.

Rocky made a star out of Stallone, but it also had a great supporting cast. Talia Shire plays Adrian, the shy love interest that blossoms into a beautiful woman. Burt Young plays Paulie, Adrian’s brother and Rocky’s best friend. Rocky represents hope and Paulie represents reality. Burgess Meredith plays Mickey, the disgruntled trainer who thinks Rocky wasted his talent, but who is still willing to help get him into shape. Carl Weathers plays Apollo Creed, the cocky reigning heavyweight who challenges an unknown Rocky to a title fight. It’s very difficult to play an antagonist with out making them a villain, so props to Weathers for playing the character the right way. 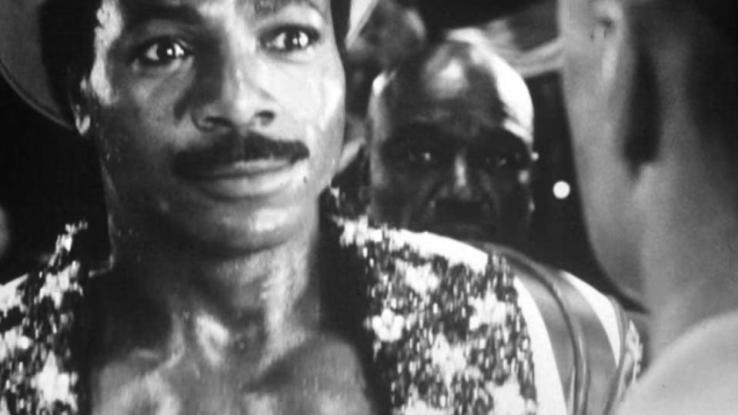 The soundtrack is amazing. It elevates the whole movie. Gonna Fly Now is the best workout song of all time. There was pioneering use of the steadicam. The training montage, fight sequences, and Rocky running up the stairs are all iconic moments that are elevated because of the filming technique. The fight choreography seems slightly dated now, but at the time it was the closest to an actual fight than anything previously seen on screen.

This is one of the best sports films of all time. It was the start of a sometimes great, occasionally mediocre film franchise. There are plenty of real life parallels that make the movie even more relatable and enjoyable. Sylvester Stallone’s best movie, and any actor should be proud to have a film of this caliber on their resume.